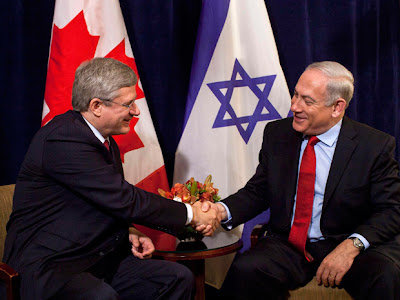 Stephen Harper meets with Israel's Prime Minister Benjamin Netanyahu on the side lines of the United Nations General Assembly in New York, September 28, 2012

Prime Minister Harper is drawing praise from his Israeli counterpart for the Canadian government’s decision to sever ties with Iran. Benjamin Netanyahu says the move was “not only an act of statesmanship but of moral clarity,” and sets a great example for other countries. Canada recently closed its embassy in Tehran and ordered Iranian diplomats out of the country.

Harper and Netanyahu met in New York after both issued public condemnations of Iran on Thursday. Netanyahu told the United Nations that Iran will be able to make a nuclear bomb by next summer.

And Harper suggested Iran poses a clear and present danger as he accepted an international statesman award from a New York-based group Thursday night. He raised the issue again at the meeting this morning, saying Canada will continue to work with its allies to alert the world about the danger presented by the Iranian regime.

Shunning an opportunity to speak at the opening of the United Nations General Assembly, Harper delivered his attack on Iran after receiving the World Statesman Award from the New York-based Appeal of Conscience Foundation.

He targeted Iran as a country that constitutes “unambiguously a clear and present danger” to the world both for its pursuit of nuclear weapons, its support of terrorism and its threat to the existence of Israel.