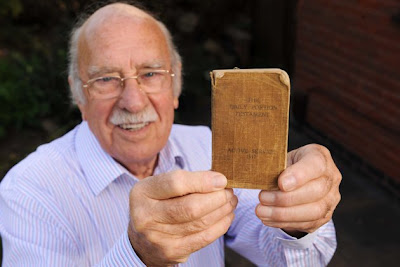 A fallen war hero's treasured bible found on his person when he was shot dead has finally been reunited with his family - by a stranger who spent 35 years tracking them down.

Private George Ford was shot dead in the Battle of the Somme in 1918 aged just 20, with his trusty bible tucked in his breast pocket.His bloodied uniform and all his belongings, including the bible, were sent back to Pte Ford's distraught family in Nottingham, where they were stored away in an attic. But after gathering dust for six decades as Pte Ford's family passed away, the wartime souvenir could have been lost forever until a builder stumbled across it in the late 1970s.

Brave: Private George Ford died at the Battle of the Somme aged just 20

Ken Greensitt, who was renovating the house where Pte Ford's family used to live, found the bible 59 years later and gave it to his nine-year-old son. During the next three decades Allan Greensitt tracked down Private George Ford's distant relatives - and remarkably managed to return the bible to them almost a century after the soldier's death. Mr Greensitt, 40, used birth, marriage and death certificates, and even details from Pte Ford's Sherwood Forresters regiment, to painstakingly track down the heroic World War One's soldier's family. 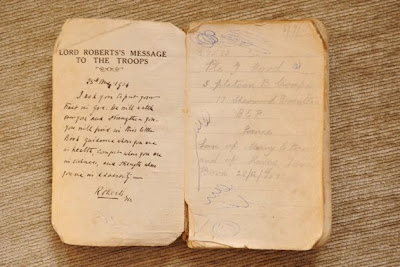 Cherished: Pte Ford's bible, which included an inscription telling him to 'put his faith in God'