Hoshana Raba 5773 - Vatikin at the Kotel

The seventh day of the Jewish holiday of Sukkot, 21st day of Tishrei, is known as Hoshana Rabbah (Aramaic: הוֹשַׁעְנָא רַבָּא, "Great Hoshana/Supplication"). This day is marked by a special synagogue service, the Hoshana Rabbah, in which seven circuits are made by the worshippers with their lulav and etrog, while the congregation recites Hoshanot. It is customary for the scrolls of the Torah to be removed from the ark during this procession. In a few communities a shofar is sounded after each circuit.

At the conclusion of a number of Piyyutim (liturgical poems), five willow branches are beaten on the ground or other surface to symbolize the elimination of sin. This is also symbolic as a prayer for rain and success in agriculture.

The hoshanot are accompanied by a series of liturgical verses climaxing with, "Kol mevasser, mevasser ve-omer" (The voice of the Herald [Elijah] heralds and says)—expressing hope for the speedy coming of the Messiah. 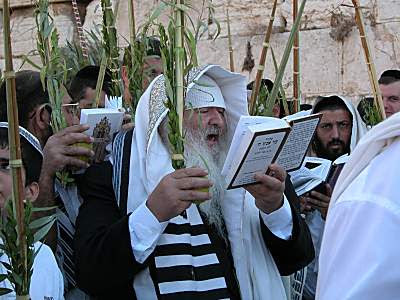