Religious Zionist MKs rev up the engines; vow to run in a united Knesset list.

Leaders of the religious Zionist camp held a conference in the Bayit Vegan neighborhood of Jerusalem, in which they proclaimed their intention to run for the 19th Knesset in a unified list.

The decision means that the National Union and Jewish Home parties will field a single list, composed of candidates from both parties.

The conference was opened by Rav Zalman Melamed, the rabbi of Beit El, who said: "The unification of our ranks is not something we are doing because we have no choice. We are all loyal to the Torah and to the Land, without blurring the differences [between us]. The purpose of the unification is to create a large force to lead the nation in a moral, value-oriented direction."

"The public that sent you on your mission has values and morality, and it has a central place in the life of the nation," the rabbi said. "This public's educational institutions are the best in the country. From here, we issue a clear declaration: we proceed together!" 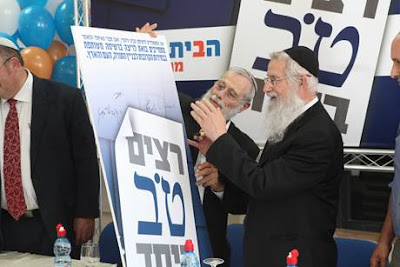